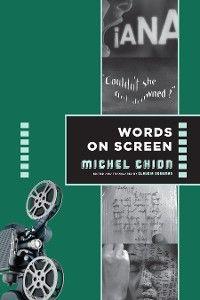 Michel Chion is well known in contemporary film studies for his innovative investigations into aspects of cinema that scholars have traditionally overlooked. Following his work on sound in film in Audio-Vision and Film, a Sound Art, Words on Screen is Chion's survey of everything the seventh art gives us to read on screen. He analyzes titles, credits, and intertitles, but also less obvious forms of writing that appear on screen, from the tear-stained letter in a character's hand to reversed writing seen in mirrors. Through this examination, Chion delves into the multitude of roles that words on screen play: how they can generate narrative, be torn up or consumed but still remain in the viewer's consciousness, take on symbolic dimensions, and bear every possible relation to cinematic space.

With his characteristic originality, Chion performs a poetic inventory of the possibilities of written text in the film image. Taking examples from hundreds of films spanning years and genres, from the silents to the present, he probes the ways that words on screen are used and their implications for film analysis and theory. In the process, he opens up and unearths the specific poetry of visual text in film. Exhaustively researched and illustrated with hundreds of examples, Words on Screen is a stunning demonstration of a creative scholar's ability to achieve a radically new understanding of cinema.