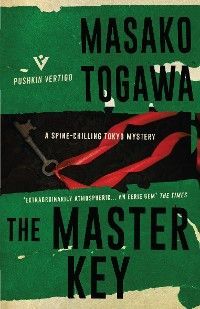 The K Apartments for Ladies in Tokyo conceals a sinister past behind each door; a woman who has buried a child; a scavenger driven mad by ill-health; a wife mysteriously guarding her late husband’s manuscripts; a talented violinist tortured by her own guilt. The master key, which opens the door to all 150 rooms, links their tangled stories. But now it has been stolen, and dirty tricks are afoot.

A deadly secret lies buried beneath the building. And when it is revealed, there will be murder.

Masako Togawa (1931-2016) was born in Tokyo. Her father died when she was young, and she spent the rest of her childhood living with her mother, in an apartment building for single women, which provided the inspiration for the setting of The Master Key. After leaving school, she worked as a typist for some years, before stepping onto the stage as a cabaret performer in 1954. She soon began to write backstage during the breaks between her performances, and in 1962, her debut novel The Master Key was published, and won the Edogawa Rampo Prize. She went on to become a hugely successful crime writer, but continued to lead a colourful parallel life as a singer, actress, feminist, nightclub owner and gay icon. She died in 2016 at the age of 83.