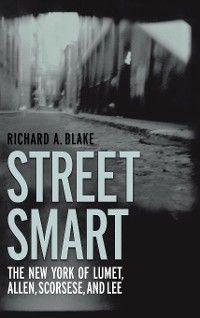 Richard A. Blake
Verfügbar
Bezahlen per

New York has appeared in more movies than Michael Caine, and the resulting overfamiliarity to moviegoers poses a problem for critics and filmmakers alike. Audiences often mistake the New York image of skyscrapers and bright lights for the real thing, when in fact the City is a network of clearly defined villages, each with a unique personality. Standard film depictions of New Yorkers as a rush-hour mass of undifferentiated humanity obscure the connections formed between people and places in the City's diverse neighborhoods.

Street Smart examines the cultural influences of New York's neighborhoods on the work of four quintessentially New York filmmakers: Sidney Lumet, Woody Allen, Martin Scorsese, and Spike Lee. The City's heterogeneous economic and ethnic districts, where people live, work, shop, worship, and go to school, often bear little relation to the image of New York City created by the movies. To these directors, their home city is as tangible as the smell of fried onions in the stairwell of an apartment building, and it is this New York, not the bustling, glittery illusion portrayed in earlier films, that shapes their sensibilities and receives expression in their films.

Richard A. Blake shows how the Jewish enclaves on Manhattan's Lower East Side profoundly influence Sidney Lumet's most noted characters as they struggle to form and maintain their identities under challenging circumstances. Both Woody Allen's light comedies and his more serious cinematic fare reflect the director's origins in the Flatbush neighborhood in Brooklyn and the displacement he felt after relocating to Manhattan. Martin Scorsese's upbringing on Elizabeth Street in Manhattan's Little Italy resonates in his gritty portraits of urban modernity.

Blake also looks at the films of Spike Lee, whose adolescence in Fort Greene, a socioeconomically diverse Brooklyn neighborhood, exposed him to widely ranging views that add depth to his complicated treatises on power, culture, and race. Lumet, Allen, Scorsese, and Lee's individual identities were shaped by their neighborhoods, and in turn, their life experiences have shaped their artistic vision. In Street Smart, Richard A. Blake examines the critical influence of "place" on the films of four of America's most accomplished contemporary filmmakers.