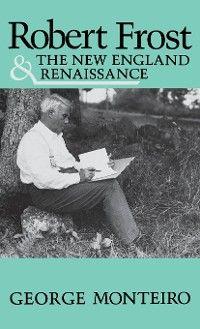 "A poem is best read in the light of all the other poems ever written." So said Robert Frost in instructing readers on how to achieve poetic literacy. George Monteiro's newest book follows that dictum to enhance our understanding of Frost's most valuable poems by demonstrating the ways in which they circulate among the constellations of great poems and essays of the New England Renaissance.

Monteiro reads Frost's own poetry not against "all the other poems ever written" but in the light of poems and essays by his precursors, particularly Emerson, Thoreau, and Dickinson. Familiar poems such as "Mending Wall," "After Apple-Picking," "Birches," "Stopping by Woods on a Snowy Evening," "The Road Not Taken," and "Mowing," as well as lesser known poems such as "The Draft Horse," "The Ax-Helve," "The Bonfire," "Dust of Snow," "A Cabin in the Clearing," "The Cocoon," and "Pod of the Milkweed," are renewed by fresh and original readings that show why and how these poems pay tribute to their distinguished sources.

Frost's insistence that Emerson and Thoreau were the giants of nineteenth-century American letters is confirmed by the many poems, variously influenced, that derive from them. His attitude toward Emily Dickinson, however, was more complex and sometimes less generous. In his twenties he molded his poetry after hers. But later, after he joined the faculty of Amherst College, he found her to be less a benefactor than a competitor. Monteiro tells a two-stranded tale of attraction, imitation, and homage countered by competition, denigration, and grudging acceptance of Dickinson's greatness as a woman poet. In a daring move, he composes -- out of Frost's own words and phrases -- the talk on Emily Dickinson that Frost was never invited to give.

In showing how Frost's work converses with that of his predecessors, Monteiro gives us a new Frost whose poetry is seen as the culmination of an in¬tensely felt New England literary experience.